A Super Lawyers Magazine article titled: “How Theodore Babbitt Turned His Life Around” gives a window into his dynamic career. From juvenile troublemaker, the Marines (Ted says the Marines was the best thing that ever happened to him), and a college student whose counselor told him he would not amount to much to becoming one of the top 100 Plaintiff Attorneys in the U.S., the article captures Ted Babbitt’s unique route to success driven by his competitive nature and passion to take on challenges.

Although his junior college counselor told him he would not amount to much, his academic accomplishments are impressive. He finished junior college early and went on to major in psychology at the University of Florida. He began law school at age 23 and graduated fifth in his class.

Ted Babbitt has successfully tackled some of the toughest personal injury cases in Florida and the US – and has obtained numerous high-profile, multimillion-dollar recoveries for his clients.

Babbitt has been a member of the Inner Circle of Advocates, an invitation-only group limited to 100 top plaintiffs' lawyers in the United States since 1975. He has been named to the International Academy of Trial Lawyers, a group of 500 of the world's preeminent trial lawyers, and is a member of The American College of Trial Lawyers, one of the field's most prestigious and selective associations. Ted Babbitt is one of just a few lawyers who have been named to all three of these prominent organizations. He has also been listed in The Best Lawyers in America© every year since that publication's inception.

In addition to winning lawsuits over the past four decades, Ted Babbitt has won accolades and esteem. He has been interviewed extensively by the media, including being on Oprah. He's written more than 100 articles that have appeared in national and local publications, given lectures for other attorneys, and chaired nearly a dozen professional committees.

Most lawyers with credentials like Ted Babbitt’s tend to oversee cases, letting junior lawyers do the legwork. That is not Mr. Babbitt's style. He gives each client the attention – and the resources – they deserve. It's a formula that's enabled him to win cases against long odds – and win the respect of his clients.

For Ted, “no detail is too small, and no opponent is too big”. Ted Babbitt is dedicated to helping his clients seek redress – and accountability – for the harm they've suffered.

Mr. Babbitt is a commercial pilot and flight instructor with ratings in single and multi-engine as well as a glider. He has been flying since 1969 and has logged more than 4000 hours. His most recent plane was a twin-engine jet prop seating 8. Mr. Babbitt is credited with being instrument rated with certification from Flight Safety and has flown volunteer flights as an “Angel” to allow sick people to get needed treatment. He is also signed up for “Pilots and Paws” to do the same thing for injured animals.

Mr. Babbitt was selected by his peers for inclusion in The Best Lawyers in America© for the following categories:

If you have suffered a serious injury due to the negligence of another person or company, you have the right to seek full compensation for the harm that has come to you. Contact Ted Babbitt today. He represents clients throughout Florida and across the United States in all types of personal injury claims.

Get your questions answered. Ted will give you an honest assessment of your case and explain your legal options. 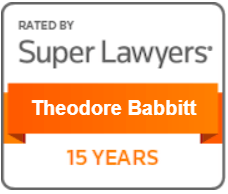 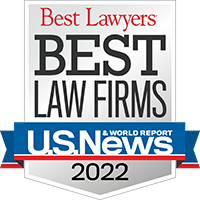